The DRI Model 2015 Multi-Wavelength Thermal/Optical Carbon Analyzer is the most advanced instrument in the world for the thermal analysis of the carbonaceous content of aerosol samples collected on filters.

DRI Model 2015 series 2 replaces the 633 nm optical monitoring that accounts for OC charring with reflected (R) and transmitted (T) intensities at wavelengths of 405, 445, 532, 635, 780, 808, and 980 nm.  The additional optical information can be used to estimate multiwavelength light absorption of the sampled particles, infer the concentration of brown carbon (BrC) in each sample, and further complement the use of carbon fractions in source apportionment studies (Chen et al., 2015; Chow et al., 2015). Model 2015 Series 2 software includes temperature programs for commonly-used protocols such as IMPROVE_A (Chow et al., 2007; 2011), EUSAAR_2 (Cavalli et al., 2010), and NIOSH (Birch and Cary, 1996; Chow et al., 2001), and it can be programmed to emulate any other protocol.  The simultaneous measurement of both R and T at all wavelengths throughout each analysis allows for reproducing any other thermal/optical method and holds potential for better characterizing additional properties of the carbonaceous aerosol. 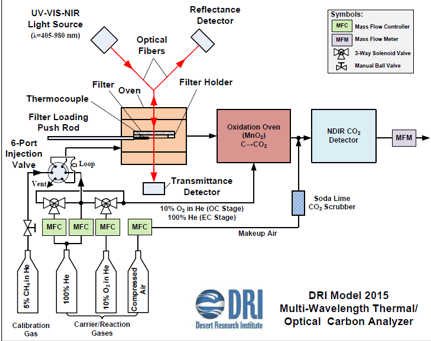 Thermal/optical carbon analysis is based on the progressive decomposition of OC and EC fractions at increasing temperatures and inert or oxidizing atmospheres.  A small punch from a sample collected on a quartz-fiber filter is heated in programmed temperature steps.  Organic compounds are released in a non-oxidizing helium atmosphere at temperatures up to 580 °C. In comparison, ‘elemental’ carbon is combusted in an oxidizing atmosphere consisting of helium with oxygen at temperatures up to 840 °C.  The carbon released from the sample is converted to carbon dioxide (CO2) by a heated manganese dioxide catalyst oven, and an NDIR detector quantifies the CO2.  Seven modulated diode lasers operating at wavelengths from 405 to 980 nm measure the reflectance from and transmittance through the sample on the filter.